A Smarter TV Mount with Arduino

Used an Arduino Nano to make a TV Mount smarter. Jump to the Final Setup section for a demo video.

Since I’m on a break in-between jobs, I thought I’d revisit my old blog and post about something interesting I’ve done during the time. I’ve been wanting to place our TV on the fireplace mantel in our family room. However, it makes the TV too high to watch. To fix this, I installed a motorized above-fireplace TV mount to lower the TV down while watching. This Monoprice TV Mount seemed perfect for it: 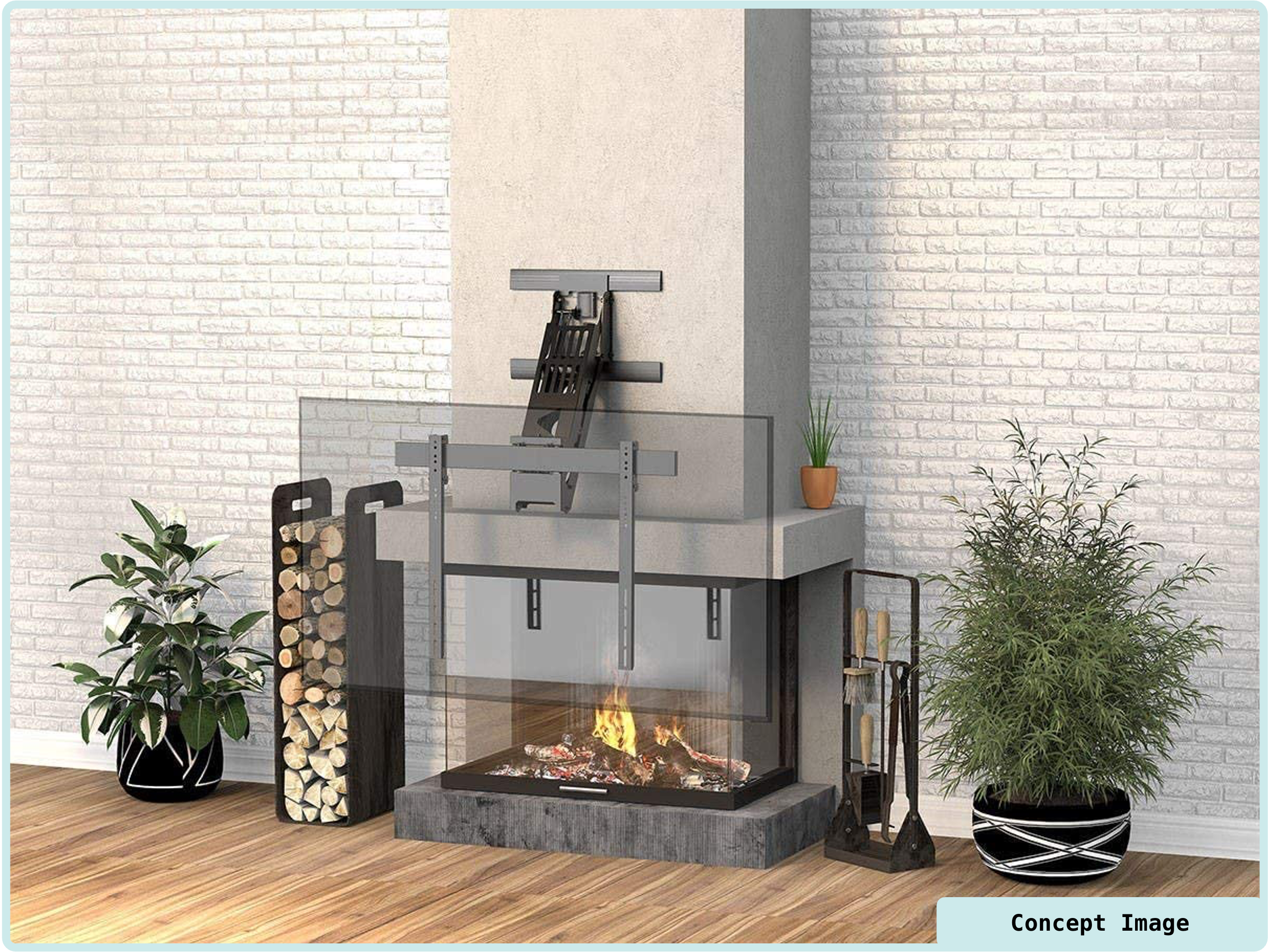 It does handle the weight pretty well. However, a few major issues:

I decided to make it better with features like:

Here’s a block diagram of the whole system: 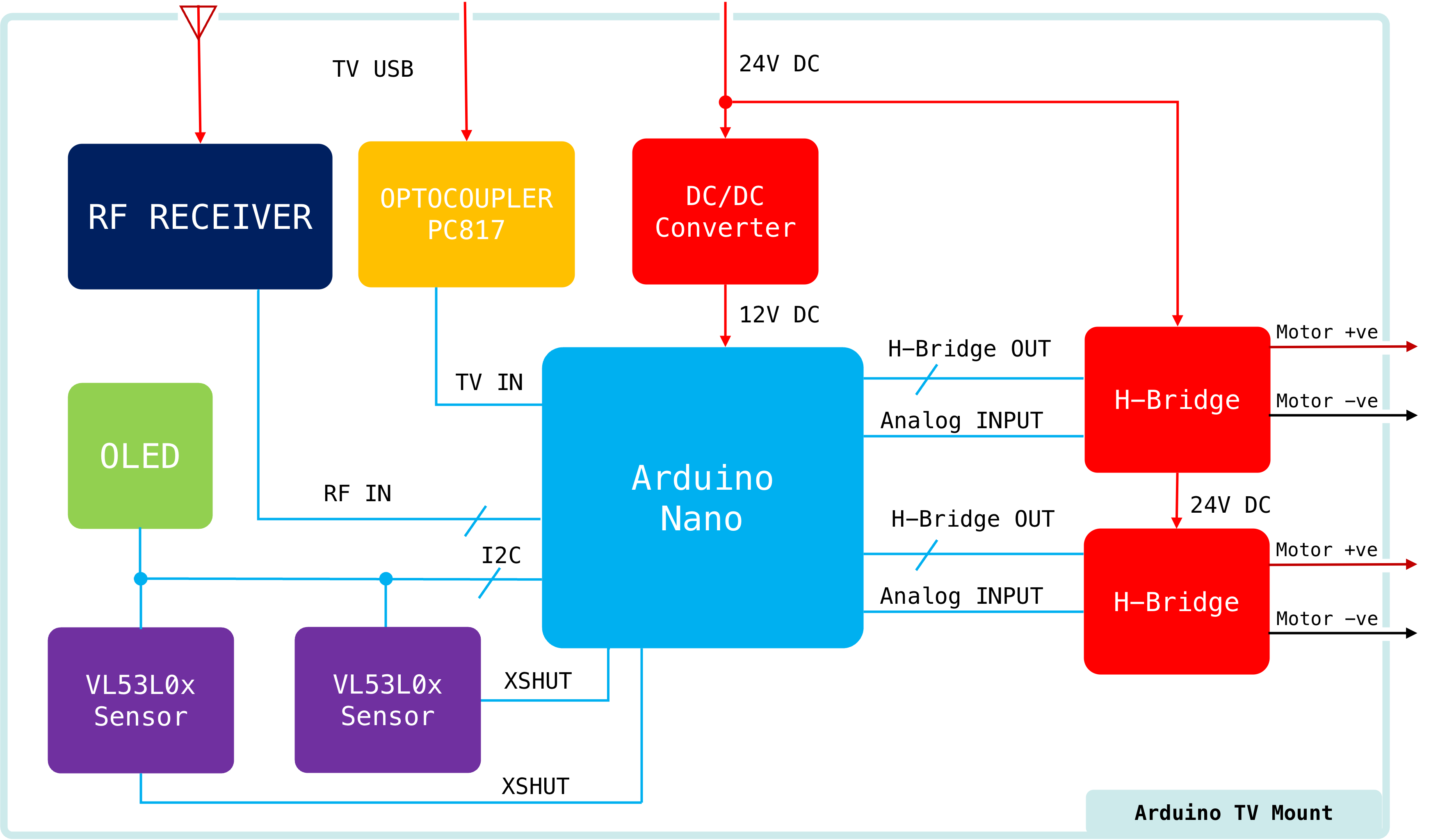 The two time-of-flight(TOF) distance sensors are VL53L0x sensors I bought from Amazon. These are pretty accurate from 20mm to 2000mm. These are placed behind the TV on the opposite ends to detect the distance from the wall, as well as the swivel angle. 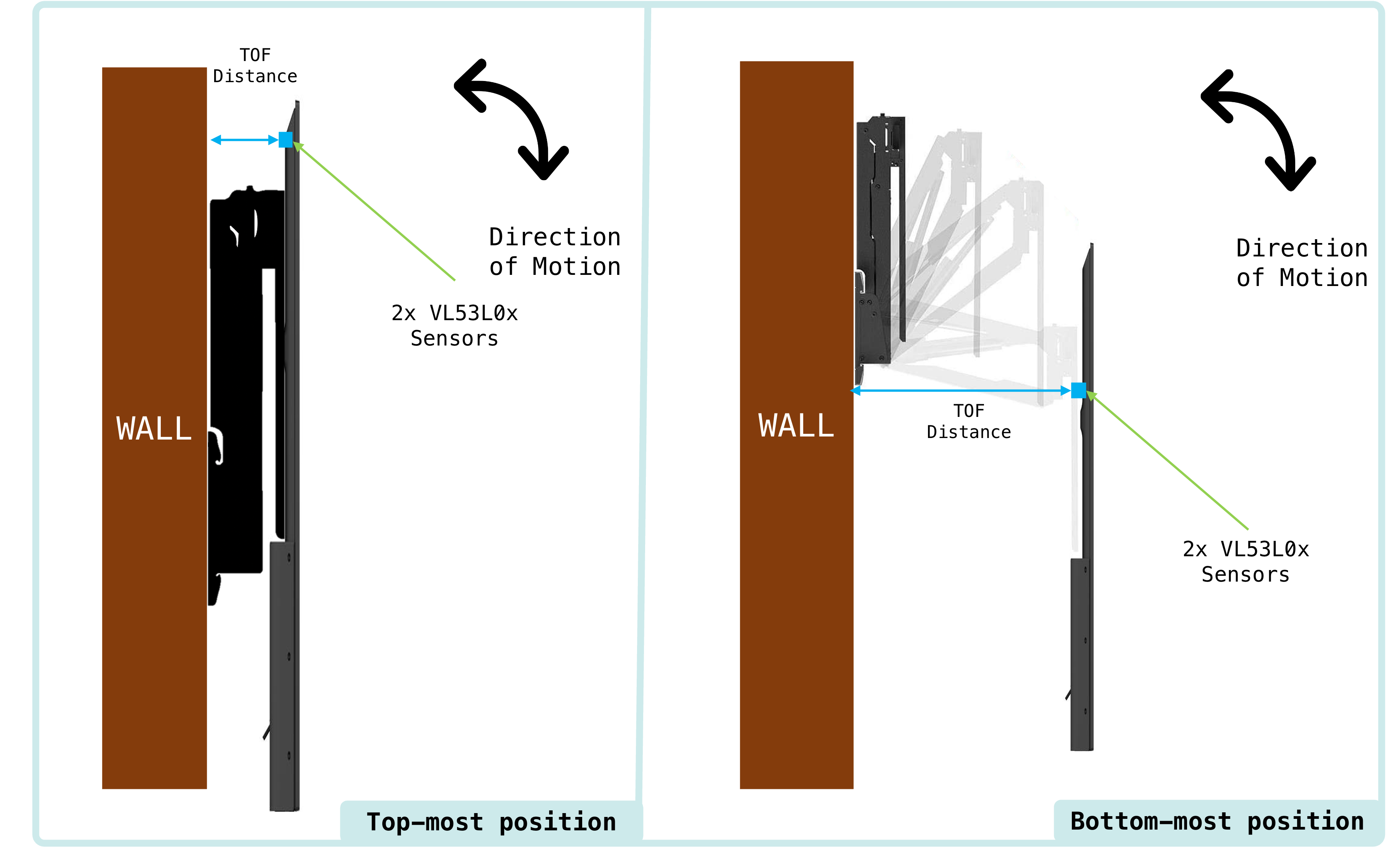 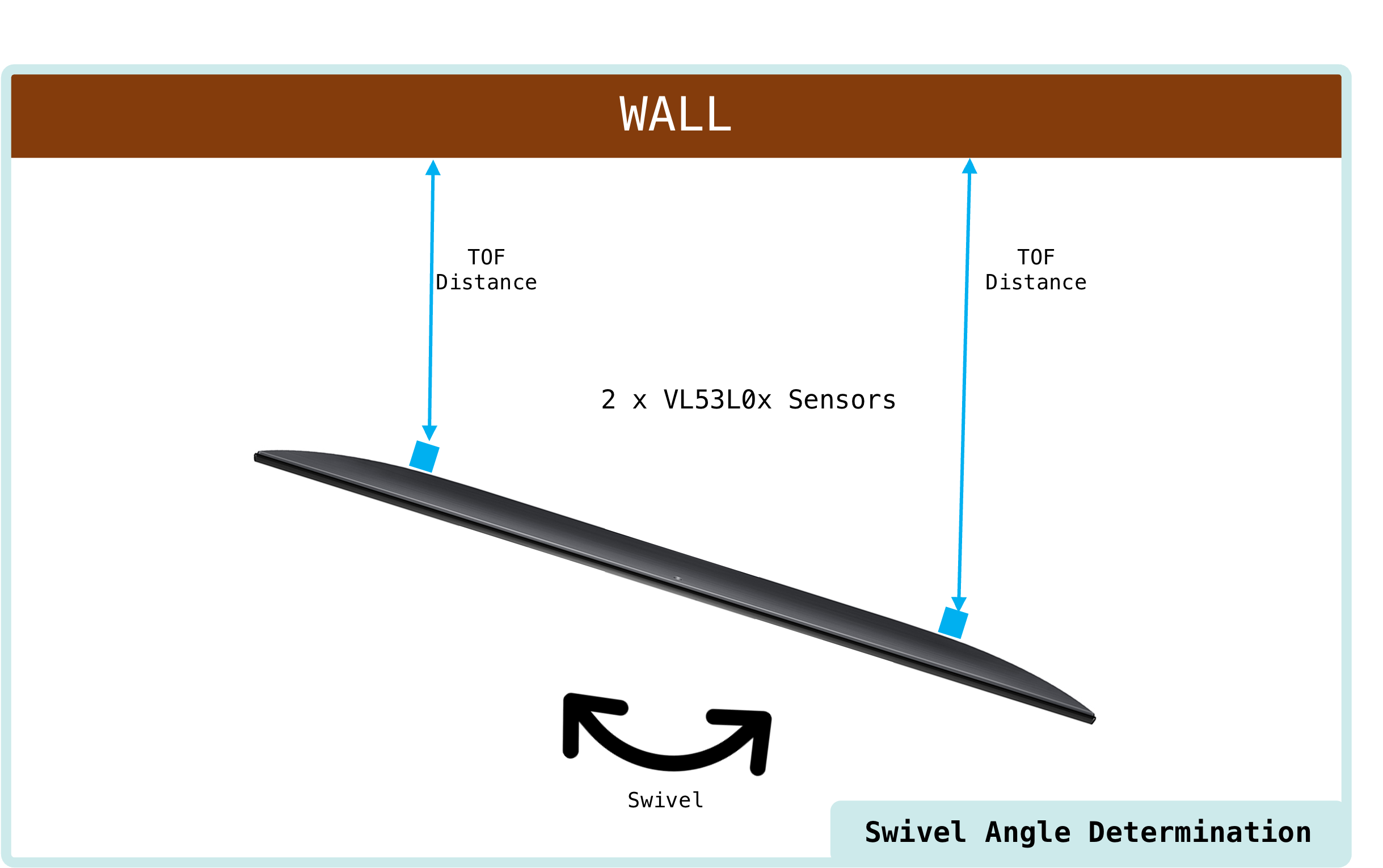 The circuit is just soldered on two separate prototype PCBs, layered one over another. The top part contains the Arduino and connectors for the sensors. Also has a USB connector for the cable coming from the TV for TV On/Off detection. The bottom part contains the two H-bridges for the two motors in the mount(up/down and swivel). There’s a DC/DC converter as well, for running the Arduino from the 24V power supply.

Fits nearly perfectly in this enclosure built for Raspberry PI: 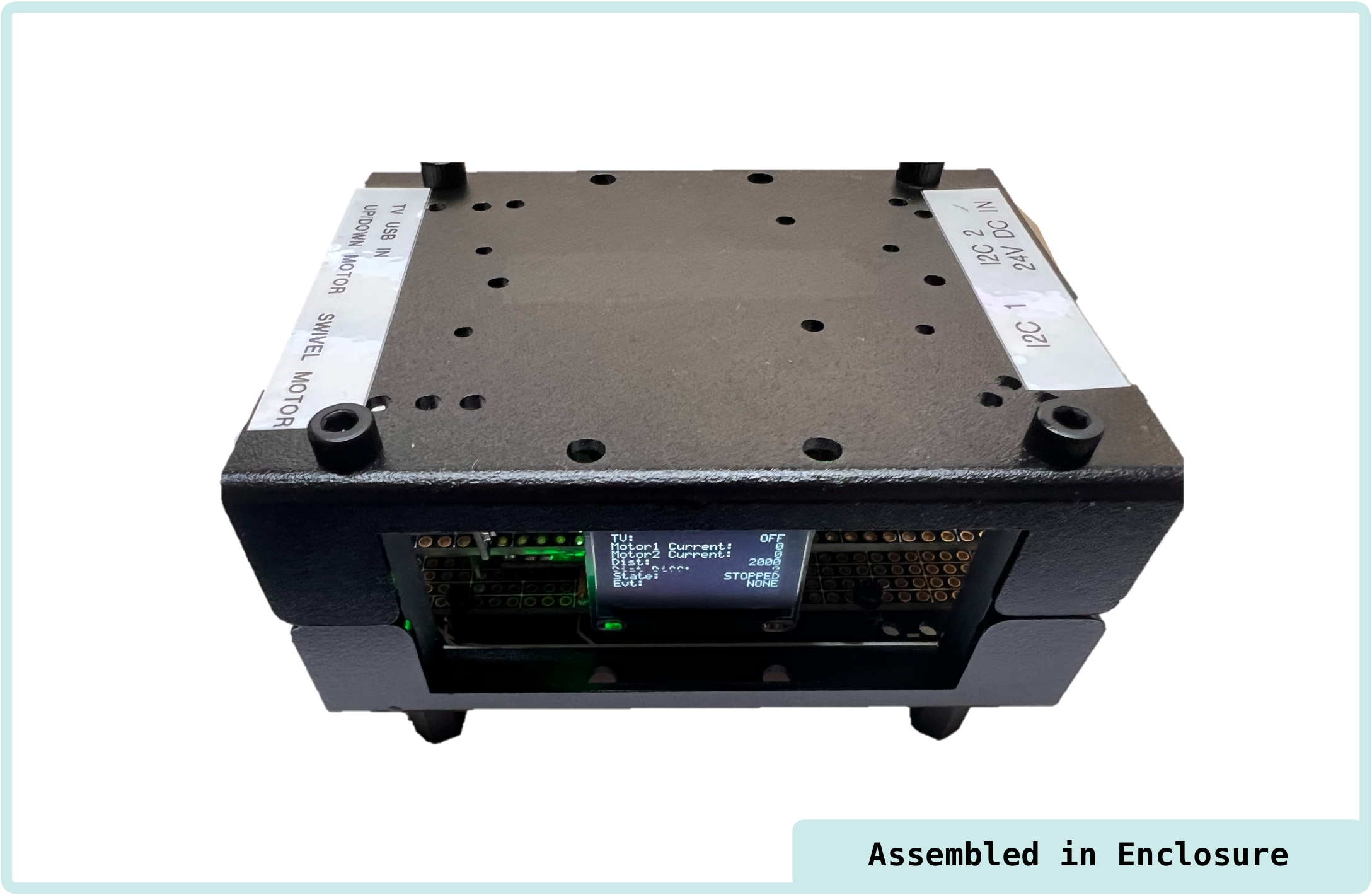 The code is written in C++ using the Arduino framework. I initially started coding in Arduino IDE but as the code got bigger, switched over to the Jetbrains CLion using the Platform IO framework. I must say that CLion is so much better to write code in!

The main part of the code is a state machine, that manages the various states and transitions based on the inputs from the remote/sensors.

As a side challenge, I also ported the code to an almost pin-compatible Arduino Nano RP2040, which is based on the Raspberry Pi Pico microcontroller.

Right now, I crammed the circuit, power supply etc in a cable box. I do plan to make it neater. Videos(5x speed) of the whole setup with TV On/Off function:

This has been a fun little project to do, and pretty useful as well. I last coded on a microcontroller (AVR Atmega series) in 2008, and it was all on custom-manufactured circuit boards. Comparing that to now, here’s what I observed:

Overall so much easier to do your hobby projects today. I too hope to pick up a few other cool projects as well. Will keep you posted. Cheers !!!!ß